Synbio 101: A primer on the next big life sciences technology

Synthetic biology (synbio) is a life sciences technology that is transforming a broad range of industries including agriculture, chemicals, food, and medicine. Synbio applies engineering principles to biology and uses genomics to “code” organisms to yield a desired product. By harnessing nature’s ability to make complex molecules, computational biologists can engineer cells that solve some of our biggest problems. This exciting new discipline offers a new way to make medicine, which is more urgent now than ever before. 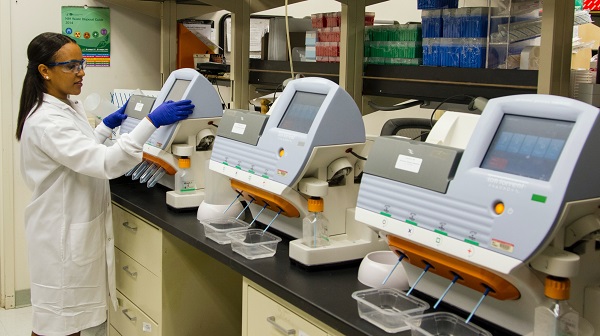 What is synthetic biology?

At its core, synbio is the manufacturing of a product using cells instead of a traditional manufacturing process. We can now program a cell’s DNA to manufacture desired proteins, the highly complex molecules that are present in all living organisms.

Christina Smolke, Ph.D., founder and CEO of Antheia explains, “It is a set of tools and frameworks that scientists use to approach the engineering, modification, and measurement of biological systems.”

“It is a set of tools and frameworks that scientists use to approach the engineering, modification, and measurement of biological systems.” — Christina Smolke, Ph.D., founder and CEO of Antheia”

This field is a progression of the tool kit that scientists have been using for genetic engineering for 40 years. That tool kit has now been automated with liquid-handling robots and digitized through software that programs DNA. The previous version involved very basic sequencing, and the ability to make copies or cut and paste DNA, for example, to engineer a juicier strawberry. Now, with synthetic biology, we can actually write DNA from scratch.

Scientists take the ingredients, called base pairs, for DNA — these are the As, Ts, Cs, and Gs that are the chemical building blocks of life — and code them to build specific proteins. The more they do it, the easier it gets to design larger, more complicated systems in less time. Because the process is computerized, there is a flywheel effect, as designs are iterated to create desired proteins.

“We now have a standard framework to go from simpler systems to more complex systems so that every time we start new projects, we’re not starting from scratch,” says Smolke.

How synbio is being used today

Synthesizing DNA in the lab can sound like science fiction, but in reality, this kind of work is already well underway. With the latest tools, computational biologists can manufacture meat and leather without animals, biofuels, microorganisms that function like mini-machines, enhanced crops, and more. Synthetic biology has already started to change the pharmaceutical industry with lab-made antibodies that can fight diseases such as COVID-19 and cancer. Leaders in this space are working to address longstanding challenges in how we make medicine and how we stabilize supply chains.

We’ve only started to tap the potential of synthetic biology, and it is already saving lives. Some of today’s most advanced drugs are monoclonal antibodies, which are lab-made proteins that mimic the immune system’s ability to fight harmful antigens such as viruses.

Many modern medicines originate from plants. The industry relies on two conventional approaches to making molecules. Synthetic chemistry requires harsh solvents, in other words, toxic chemicals. The other source, harvesting from natural medicinal plants, is inefficient and vulnerable to geopolitical problems and environmental events that can wipe out crops. Neither conventional method can keep up with spikes in demand, such as the sudden need for vaccines and therapies for COVID-19.

“It’s a two to three-year process from putting plants in the ground to getting medicine,” says Smolke.

It’s no wonder, then, that hospitals run out of drugs, and there are 175 drugs on the FDA drug shortage list.

Plus, traditional agriculture requires pesticides, land, and water — all to harvest a few molecules and then discard the rest of the plant. A synbio approach can make the necessary supplies in weeks instead of years, while also being sustainable, domestic, and scalable. This reduces supply chain risk.

There are three major therapeutic categories: (1) Small molecules, (2) Large molecules (Proteins also called “Biologics” because they are made by cells), and (3) Cell and Gene Therapy.

The predominant way to discover new drugs involves synthetic chemistry, which is inefficient and can only access a very narrow chemical space. Natural biological products, on the other hand, have access to a broader range of molecules. For example, biologists can take yeast, a single-celled organism, and genetically program the yeast cells to manufacture proteins that have properties that we want. We can also remove properties that are undesirable. For example, oral protein therapeutics have been difficult to make because the gut’s acidic environment can break down the protein before it has a therapeutic effect. In addition, proteins can cause an undesirable immune response. Synthetic biology gives us the tools to use software to specifically program the cell to make a protein that maintains its therapeutic effect without the undesirable properties.

Synthetic biology allows us to access the full range of chemicals because scientists can now build out compounds that mimic natural properties.

Synthetic biology is changing the way we develop vaccines and diagnostic tests. These new methods are much faster than the traditional way of making vaccines, which is critical in this pandemic. Not only is there an urgent need for life sciences technology, but recent advances have made synbio incredibly fast and affordable. On top of that, artificial intelligence tools such as machine learning can find clues in massive data sets that even hundreds of the smartest scientists in the world wouldn’t possibly be able to identify because of the volume. Algorithms can find connections that we don’t see. The result is that we can make unprecedented breakthroughs when designing medicine.

Now that we have the ability to quickly and affordably read and write DNA, scientists can design complex systems that weren’t possible ten years ago.

Read our latest news and updates.

Biospring Partners Welcomes Industry Executives To Its Advisory Board